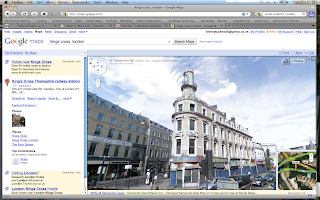 Here's a page investigating the mysterious old Lighthouse, on top of a derelict fish n chip shop, opposite Kings Cross station. The whole block has been derelict for over 20 years.
What this page doesnt say, is that the site was previous, where a monument to king George 1V was erected in 1830. It was sixty feet high and topped by an eleven-foot-high statue of the king. The upper storey was used as a camera obscura while the base housed a police station and then a pub. The monument was unpopular and was eventually pulled down and the Lighthouse was built in its place. Locally, the building was thought to be an advertisement sign for Nettons oyster bar below. These rumors now are thought to be untrue. The area remains know as kings Cross after this monument.

As it stands this is one of four Lighthouses in London.
Check:
http://www.urban75.org/london/oyster-bar-kings-cross.html
Posted by Wildcornerz at 16:54 No comments: