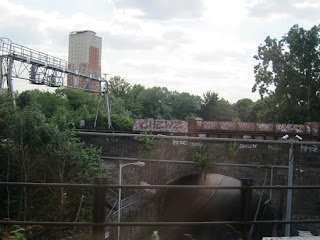 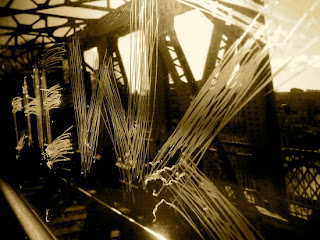 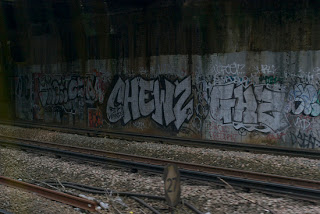 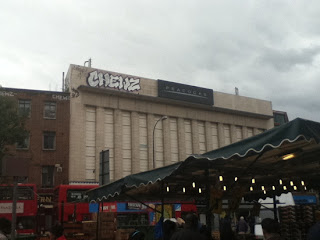 [ Article from www.thelondonvandel.com ] 24 year-old London based graffiti writer Chewz, known particularly for his hollow chrome throw-ups, has plead guilty to 22 charges of criminal damage (as well as one charge of burglary and one of common assault) and was sentenced to 21 months in prison. While we will not post his mugshot or “name and shame” the young man, we can report that he has been sentenced to 21 months in prison, as well as being given a five year ASBO (which states that he must not carry paint, marker pens or glass-cutting equipment anywhere in England and Wales, and that he is expressly banned from non-public areas of the railway network). The British Transport Police caught up with Chewz after a tag he was convicted for in 2002 began to reappear in South London. When officers re-investigated him, they found evidence on his Facebook page that suggested that he was also responsible for the Chewz graffiti. He was arrested, and found to be in possession of large amounts of graffiti paraphernalia (which could be anything from magazines, to markers or pens), and was bailed to return, but he never did return to court when he was due to in August, choosing to going on the run. Eventually, in November, the BTP caught up with Chewz and he was charged, including nine offenses that are supposed to have happened while he was on bail. The court heard that Chewz damaged Nelson’s Column in Trafalgar Square during the November 2010 student riots and that he attacked 17 trains at the Grove Park depot on May this year. They were shown evidence from Chewz’ home linking him to the tag, as well as images on his phone and Facebook, and even a tag in the dust on top of his TV. Chewz plead guilty to the charges, which the prosecution claimed amounted to £69,000 worth of damage. As often happens with these cases, some have been suspicious of this figure, which suggests that it cost £4,000 to clear up two pieces of graffiti on the trackside near London Bridge, and just over £2,000 to clean South West Trains carriages at Waterloo. Trackside walls between Charing Cross and Waterloo East apparently cost £3,000 to clean. Perhaps there is an argument to be made that graffiti on a train window affects health and safety, because people can’t see out of the train, but if it honestly costs £4000 to paint over a trackside piece, why not just leave it? The tracksides near Finsbury Park station don’t seem to get buffed, and it doesn’t seem to bother anyone. BTP spokespeople have made the usual comment, that graffiti is not harmless, because the costs of the removal get passed onto the fare paying passenger. A clever approach to the issue, designed to get members of the public on-side. Steve Taylor, Duncan, Nathanswan, Nshillingford, Peble Head, Di’s Free Range, Cocabeenslinky, Nothing8339 and 404 took these photos. Thanks to R for the news.
Posted by Wildcornerz at 18:56 No comments:

Original markings of The Lewisham Natureman

Here is my ongoing collection of mobile phone pics of the Lewi Natureman tags from around the borough. Started 2005 [ongoing]. Some of the scores date back to earliest 1993 but there are reports of LNM tags dating back as early as '88. I am still looking for my own photos taken back in the day![when i was still single figures.]
i stuck all the photographs in a blank book but then took them out a few years later when i was a young teenager and wanted to use the book as an emo diary. They are one of my most sort after treasures and i will find them one day.

Jack Thurgar's photostream on Flickr.
Posted by Wildcornerz at 16:03 No comments: 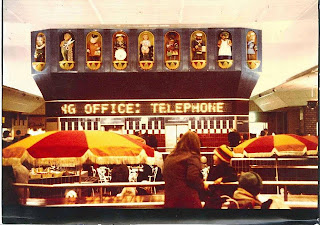 Old Characters of Lewisham [article] I used to watch these with open mouthed wonder when i was young. They used to turn round on the hour, one by one.
Posted by Wildcornerz at 17:04 No comments: